Read these amazing stories from our remarkable fundraisers.  See some of the different and inspiring ways people like you have raised money to support us.

3 Ply's story about racing across India in a rickshaw to raise funds for Camp Purple Live 2020: Will they do it again?

The reactions to the news that two fellow crohnies and I would attempt to drive a rickshaw 3000km through India were priceless. 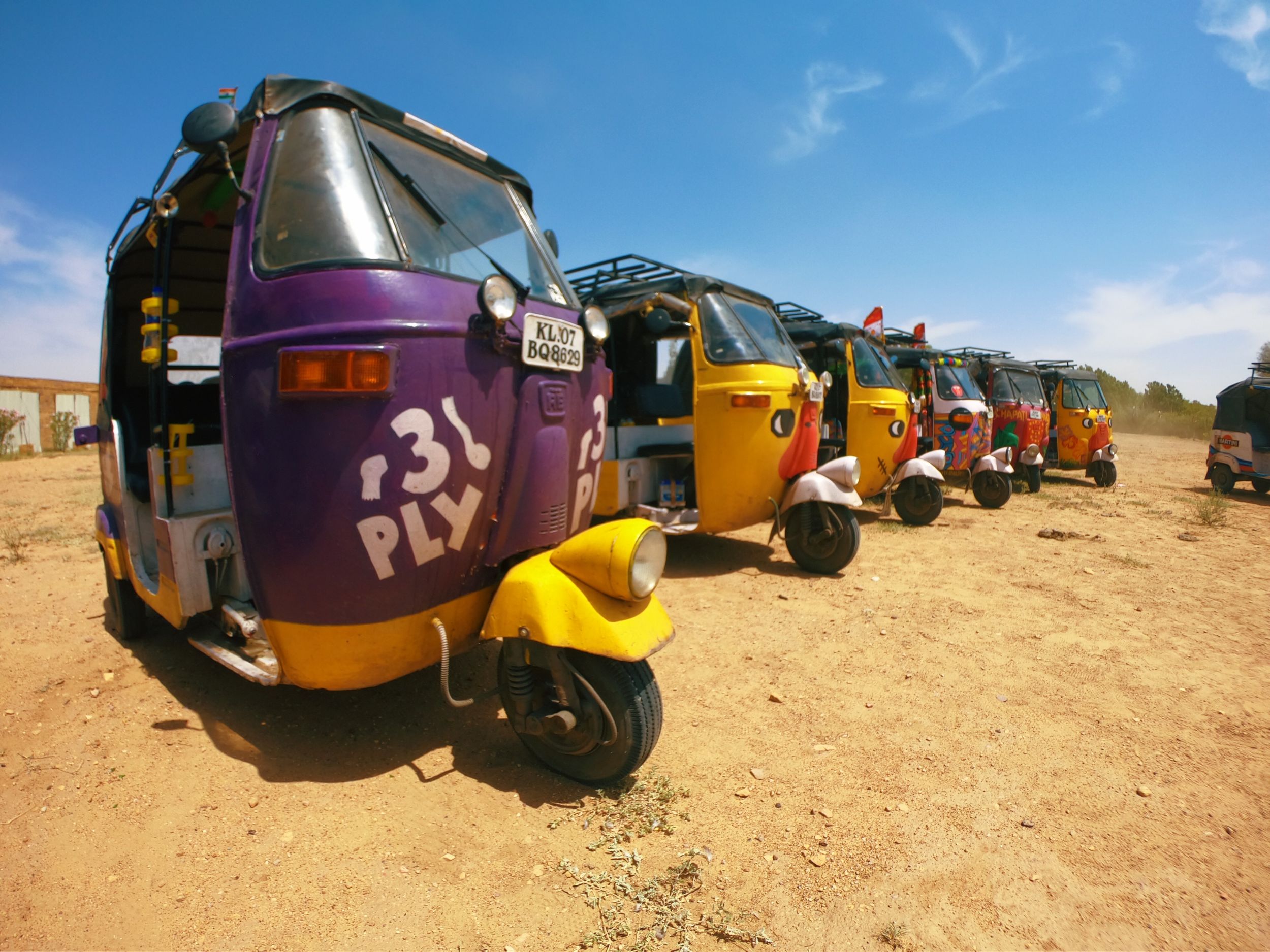 “I personally think you three are nuts for doing it,” said a fellow crohnie.

It was a sentiment shared by all three of us - and our parents.

In January 2019, Josh Bardell, Sean Boult and I decided to tackle the Rickshaw Run India in August. I had only just met the pair at that year’s Camp Purple. And before they had time to say IBD, we were signed on to driving a glorified lawnmower the length of India in just 14 days.

When you last heard from us, we were preparing to fly out to India and our fundraising tally stood at $22,000.

It’s now been five months since Josh, Sean, and I rolled up to the finish line in Jaisalmer, more than 3000km from our starting point in Fort Kochi.

Much to our amazement, not only did we make it through the adventure of a lifetime in one piece; that includes our rickshaw, Rocky; our final fundraising tally far exceeded our expectations. And to that, we owe our IBD community, friends, family, work colleagues, and everyone who messaged us along the way offering support (and sympathetic thoughts at every breakdown), an enormous amount of gratitude.

In those 14 days, we learnt valuable life lessons: the art of waving down strangers when broken down on a highway; that you can NEVER truly trust Google maps, especially when it tells you your hotel is up a giant sand dune; and that just because a hotel looks palatial does not necessarily mean the swimming pool is safe for human entry! We were also treated to endless amounts of generosity and hospitality by the locals, discovered that rickshaws can be raced on go-kart tracks; that it is not wise to travel through a wildlife sanctuary, where tigers, leopards and elephants reside, in a three-wheeled open-sided vehicle at night; and that stopping in a village will ultimately end in a meet-and-greet with every member of the village and sometimes a camel ride. I should also mention we found out that terrifyingly large snakes aren’t afraid to take on rickshaws or cars on the road and, perhaps most importantly, that we have been living a lie our entire lives… naan is not as common as NZ Indian restaurants would have you believe. 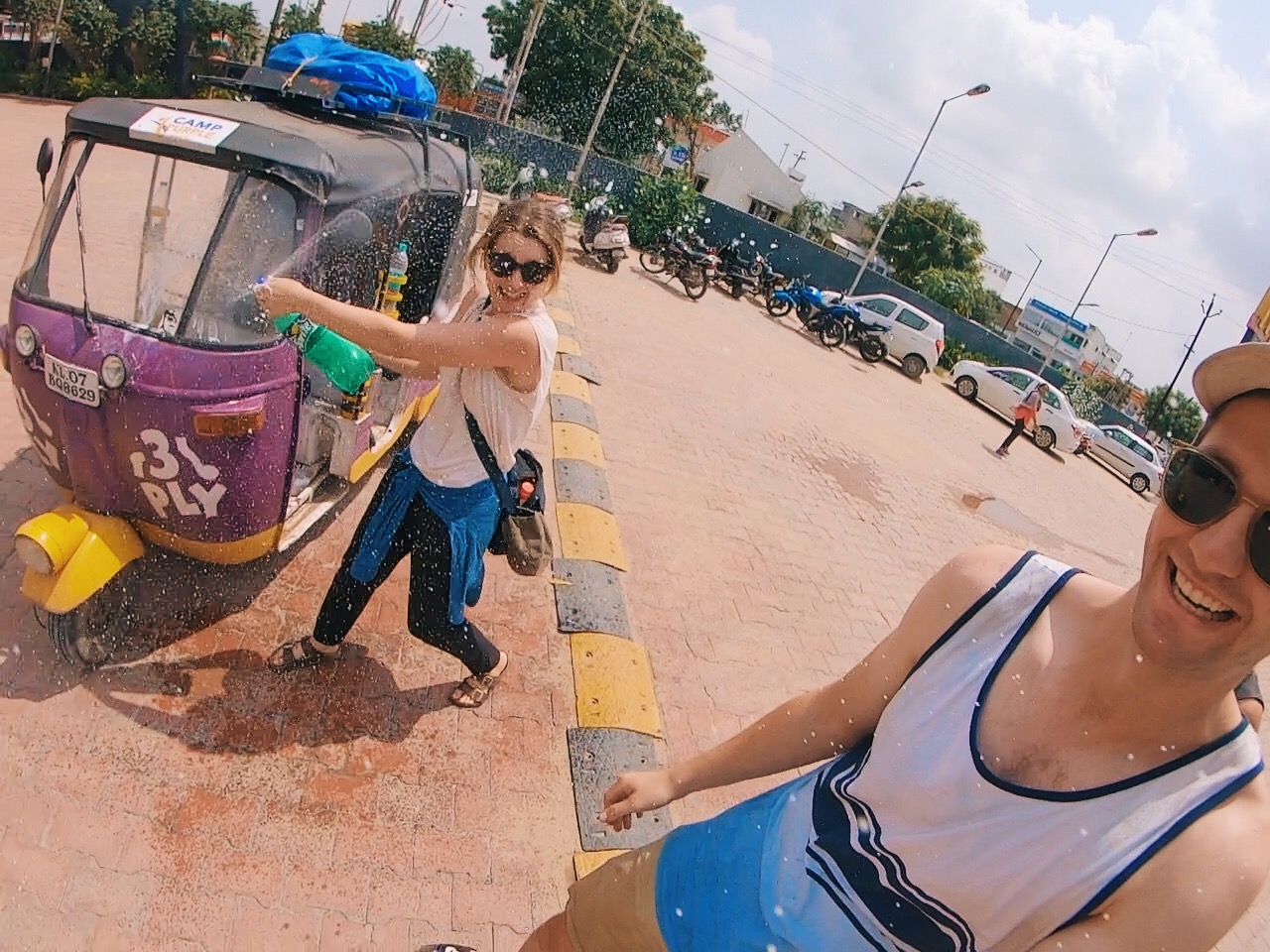 While we had an absolute ball on the Rickshaw Run, it certainly was not without its challenges. There were days we clocked up over 12 hours of driving to ensure we remained on track. And, by the time we reached Rajasthan in northern India, temperatures were soaring well above the 40s. While Rocky preferred a 25:1 oil:petrol mixture, cold Sprites were our fuel of choice to battle this insane heat. Still, there were days when the heat and endless hours spent navigating traffic jams or dodging thrill-seeking and overtaking bus drivers took a toll on all of us. There were also times when the constant barrage of selfies from total strangers forcing their way into our rickshaw run became a little too much… not to mention those 8.5 breakdowns.

So how did we make it from A to B? The answer to that is easy. The Rickshaw Run organisers abide by this concept of the ‘unroute’.

“There's a start line and a finish line and everything in between is up to you.”

It was exhausting, testing, ridiculous, nerve-wracking, heart-warming and eye-opening. Every day presented us with a whole raft of challenges that we never thought possible. In a way, it’s fitting, given that’s the way of Crohn’s Disease; you never know what you’re going to get thrown.

So while we had one heck of an adventure, we did this because we believe so strongly in showing children with IBD that they can not only live a good life, it can be exciting, slightly bizarre, and scare the crap out of their parents (in a way that doesn’t require a trip to the hospital). If we can tackle the Rickshaw Run and come out relatively unscathed–we’ve probably all got some driving-inflicted emotional trauma–anything is possible!

If you would like to see a glimpse of our journey, check out the 3 Ply video on Youtube. We dedicate this video to all our supporters and donors, who helped us raise funds for Camp Purple Live 2020.

So, what’s next? We can neither confirm nor deny rumours of a 2021 reunion. Hopefully, we should all be fully recovered by then too! 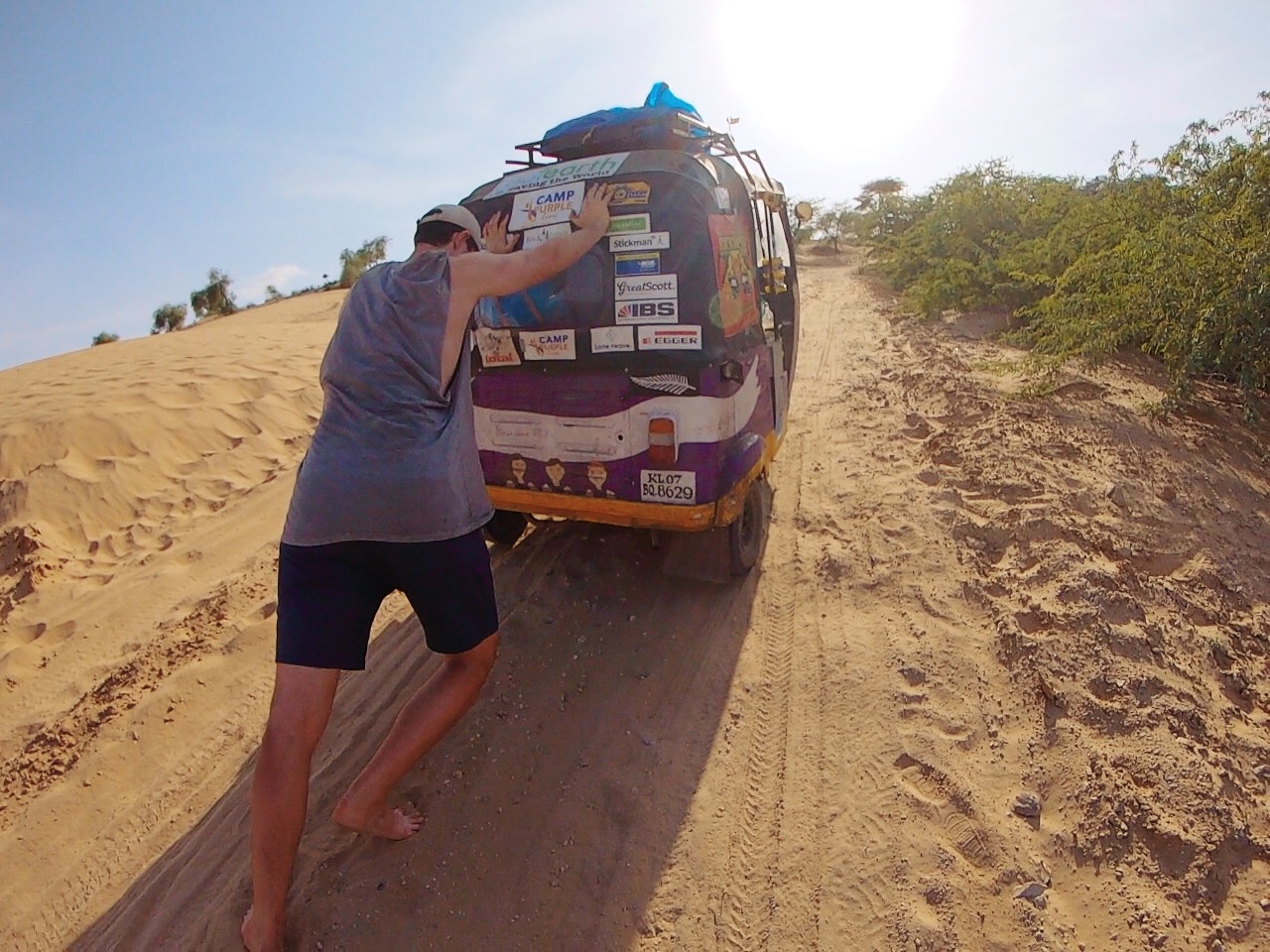 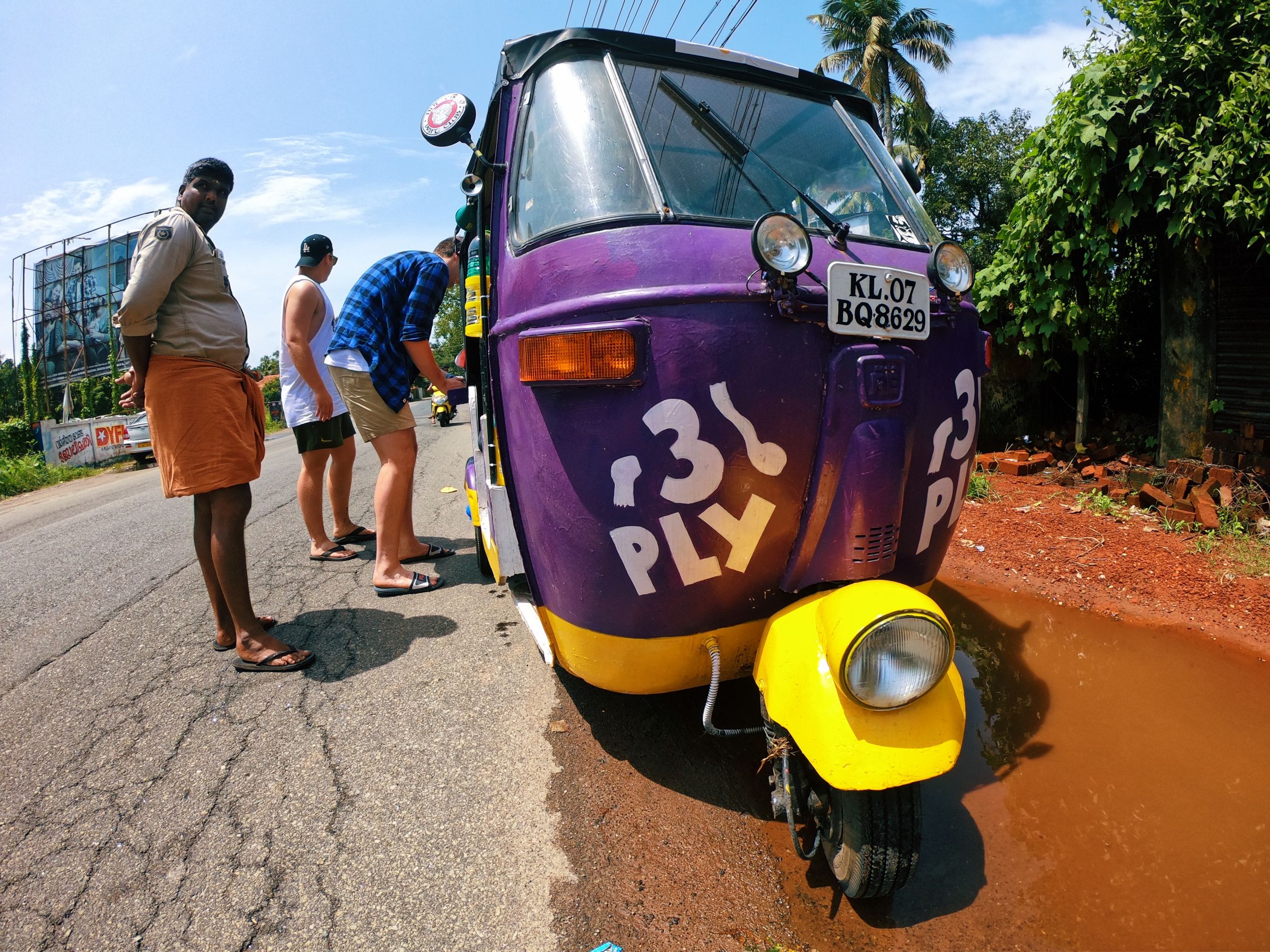 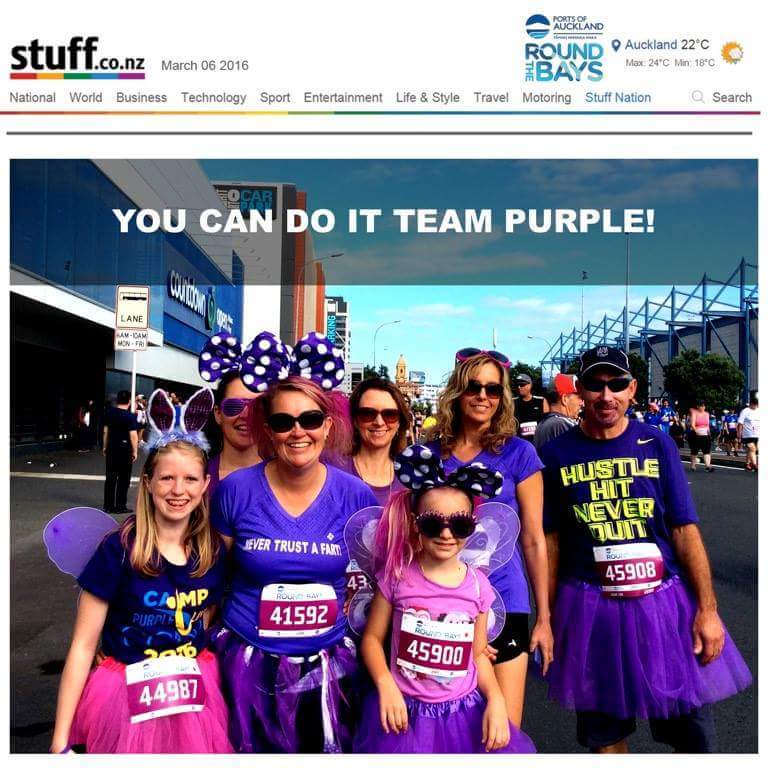 Camp Purple Live is a cause I am extremely passionate about.  I participated in the Auckland Round the Bays in 2014 to raise funds for the very first camp and decided it was a good opportunity to raise funds and awareness again this year for the camp.  The first year I did it with two friends in purple tutu’s.  This year I decided to rope in more people and have them wearing as much purple as possible.  The aim was to create awareness for IBD. 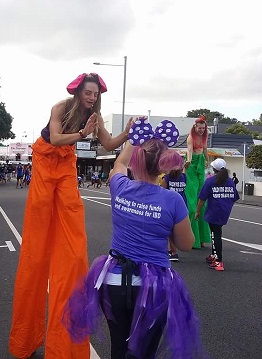 We were certainly stopped a lot along the way and were asked many questions about IBD.  It was great to have Beth turn up as she herself has been to camp twice, as a camper, and it’s fantastic to have the kids participating and raising awareness for their own camp.  I am also extremely fortunate to have such wonderfully supportive people in my life who also turned up and walked with me.  The plan is to encourage even more people to participate with me in the coming years so we can have a SEA OF PURPLE! 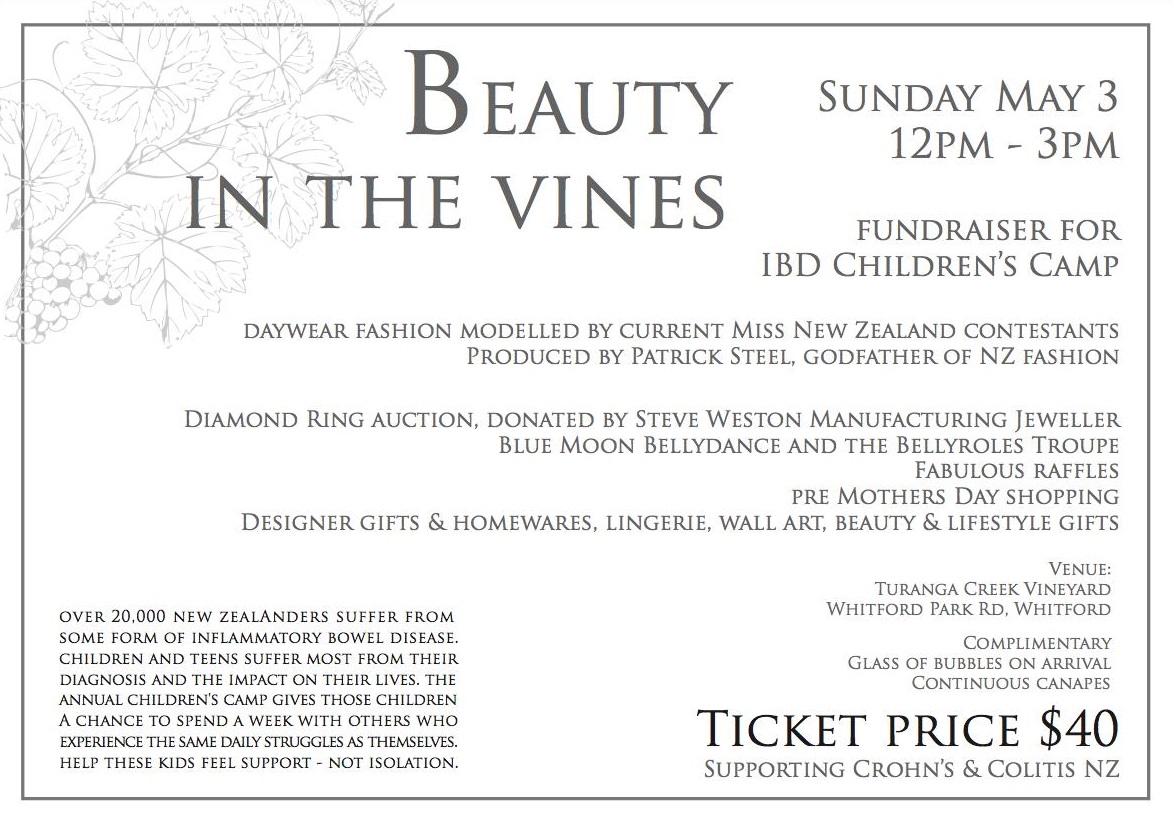 Many visitors to this website are no doubt familiar with Emilia Dalton for her facebook page IBD NZ Support Buddies. What many do not know is that, despite having been diagnosed with ulcerative colitis,  she is the current title holder of Ms. New Zealand United Nation International 2015 and, this past May, organised a fundraiser for Camp Purple Live called Beauty in the Vines. It featured a fashion show, auction, and gift show, with all proceeds going to benefit the camp in January 2016.

In Emilia’s own words,

“I’d love to give back and support especially the IBD kids...in their every day struggles of living with this disease...and alleviate some of the stress that these children and their families experience. I also run a Facebook support group called IBD NZ Support Buddies! Currently we are about 229 members strong and growing! All members can access the forum any time of the day and night for support from other members experiencing the same issues. Whether it be accessing information on how to deal with particular issues but also provide a shoulder to cry on or just emotional support. Living with IBD is not easy – but hopefully I’m providing a service to make it easier on all involved”.

CCNZ is eternally grateful for the support she has given to the camp as well as her  commitment to support others with IBD.

+ Text Size -
Do NOT follow this link or you will be banned from the site! Original generation time 1.3695 seconds.