Keep up-to-date with the latest developments in IBD research by signing up to receive our 'Moving-On' newsletter.  A selection of recent articles is available below.

What is it like to live with inflammatory bowel disease in New Zealand?

Atlantis Healthcare were asked by Janssen-Cilag (a pharmaceutical company) to talk to people living with IBD about their experiences.

From this we tried to capture what it’s like to live with IBD from a medical; physical; psychological and social perspective. This is called a Patient Journey

How do we identify the bad guys driving inflammatory bowel disease?

As late as the 19th century we still believed in miasma – that infectious diseases travelled on ‘foulsome air’. The word malaria literally translates as bad air. Robert Koch and Louis Pasteur then defined the germ theory, that specific microbes cause specific diseases; revolutionising the treatment of infectious disease. Antibiotics together with vaccination and increased hygienic practices have resulted in a marked reduction in the morbidity and mortality of infectious diseases; and to date remain one of the only measures that can eradicate established disease. Concomitantly however, there has been a rapid rise in allergy, cancer, obesity, diabetes and inflammatory bowel disease (IBD), now known as ‘the secret killers’ of the modern world. These diseases have reached epidemic proportions and, for the first time, they are reversing the increase in life expectancy that has been achieved over the last century.

Until recently, we have neglected beneficial gut microbiota and their interactions with the immune system in our quest to understand and treat these new immune mediated diseases. For too long we have considered gut microbiota simply as co-living organisms residing in the gut lumen. Our gut is an ecosystem housing trillions of microbes, with ten times the number of cells and over 100 times the number of genes when compared to the human body. Through recent cutting edge discoveries we now recognise the gut microbiota co-evolves in a mutualistic relationship with its host, a crucial event that impacts the function of the host’s immune system. Indeed, the absence of gut microbial colonisation results in a poorly developed immune system and high susceptibility to infectious pathogens.

While the gut microbiota provides many benefits to the host, it requires strict immune control to maintain intestinal health. Imbalances of gut microbiota are associated with a number of disease states including allergic responses, adiposity, the formation of tumours, and intestinal inflammation such as IBD. A number of immune defence mechanisms contribute to control the location and composition of the gut microbiota and regulate immune responses in the intestine. Of these, immunoglobulin A (IgA) is an antibody that plays a critical role in the intestine. The main function of IgA is immune exclusion, preventing bacteria from reaching the epithelial cells. It also has an important role in both neutralising pathogenic bacterial antigens and toxins, and to nourish gut microbiota to maintain health. IgA deficiencies have been linked to microbial dysbiosis and increased intestinal inflammation. A new study now suggests the potential of identifying specific gut microbiota that promote an inflammatory state by assessing the degree to which IgA coats these bacteria1.

These findings now suggest that IgA coating could potentially identify inflammation associated gut microbiota in patients with IBD. More research needs to occur to address the following questions. Are there more than the 35 identified IgA bound gut microbiota species to be found in a larger number of IBD patients? Do patients in clinical remission have less IgA-coated gut microbiota as compared to when they were first diagnosed with disease, or their last disease flare? Most importantly, can we target these IgA coated gut microbiota without affecting the rest of the gut microbiota community needed for health? This represents a major challenge, and it is likely this approach may be applicable to only a subset of IBD patients. Yet such a possibility represents an exciting breakthrough for IBD, and may provide a novel approach to disease treatment.

How good a test is it?
Calprotectin is a very good marker of inflammation, but, like any test, there can be false negative and false positive results. In one study in patients with Crohn’s disease, however, it correlated much better with the inflammation seen on colonoscopy than some of the  tests that we currently use like the CRP and the Crohn’s Disease Activity Index (CDAI).

How can the test be used?
Some people propose that it can be used as a screening test in people with symptoms suggestive of IBD (such as diarrhoea and abdominal pain) to determine if they should undergo a colonoscopy (particularly in children in whom we might want to avoid doing the procedure). Others have suggested that it can be used as an objective measure (rather than relying on symptoms alone) to see if people are responding to their medications.

Are there conditions other than IBD that can cause an elevated calprotectin level?
Yes. Calprotectin levels can be raised in ANY condition which causes intestinal inflammation (such as infections).

Is the test accurate?
While the cutoff for a normal test is <50 mcg/g stool, there is a “gray zone” where higher levels may or may not be significant. A very high level (>500) correlates very well with active inflammation.

How you do the test?
It is very simple. You just have to bring in a stool sample (you only need a few grams). Calprotectin is very stable so the specimen does not need to be refrigerated or brought immediately to the lab.

Is it expensive?
It costs about $150, but price varies from  lab to lab. Most DHBs cover the test.

How come I never had the test done?
This is just one test that doctors can use, but it cannot replace a thorough history and physical examination. In most situations, it is not a necessary test to determine the best treatment, but it may have a place in the situations mentioned above. As usual, more studies need to be done to best determine how to use this test.

A new drug on the horizon

In the intestine, the integrin ‘key’ is called alpha-4 beta-7 (also known as α4β7) and the ligand or ‘lock’ is mucosal addressin cell adhesion molecule 1 (or MAdCAM-1 for short).

Just like the key/lock analogy, each integrin is specific for its ligand. Therefore, the ability to interrupt the migration of inflammatory cells by targeting the specific key is highly desirable, as this generates very precise intervention at the site of inflammation.

Vedolizumab is an antibody that targets the intestine specific integrin α4β7, effectively preventing it from being able to ‘unlock’ intestinal inflammation. Excitingly, the results from the phase III clinical trial of Vedolizumab have shown this antibody to be effective both in the reduction and in the maintenance of remission of ulcerative colitis. Specifically, 47.1% of patients on Vedolizumab compared with 25.5% on placebo showed a clinical response at week 6 of the induction regimen, and 16.9% compared with 5.4% were already exhibiting clinical remission at that time point [1].  Maintenance treatment with 4-weekly Vedolizumab resulted in 44.8% of patients being in remission at the 52-week time point compared with 15.9% on placebo [1].

Further studies are warranted to fully understand what is going on.

Up to one-third of ulcerative colitis patients may require surgery because of their disease. The most commonly performed surgery is a proctocolectomy with ileal pouch-anal anastomosis, commonly known as a j-pouch. Over the course of one, two, or three surgeries, the colon and rectum are removed, and an internal pouch is created by attaching the small intestine to the rectal cuff, eliminating the need for an external pouch.

Although a j-pouch can significantly improve ulcerative colitis symptoms, many patients experience other symptoms or complications related to their internal pouch. To adjust to their new normal, patients report making important accommodations to their daily life, including dietary modifications, use of medications to slow the pouch function down, adjustments to their job responsibilities, and other equally important modifications to help live with their changed anatomy.

Last year, a group of  researchers sponsored by the  Crohn’s and Colitis Foundation Surgical Research Network   conducted the PROPS (Patient Reported Outcomes after Pouch Surgery) Delphi Study looking to patients and clinicians to gain a better understanding of what constitutes the spectrum of normal life in the life of a patient with an internal pouch. The team received input from more than 200 patients and nearly 120 clinicians. This cohort of volunteers identified many of these important symptoms and accommodations. The PROPS team is now recruiting participants for a second follow-up study. This time the PROPS team seeks to develop a standardized patient questionnaire that will help measure the frequency and impact of these symptoms and accommodations on patients. They also aim to understand how some of these experiences may change over time.

Eligible participants will be asked to complete a web-based questionnaire, and possibly a second one two weeks later. Each of these questionnaires should take roughly 20 minutes to complete and will ask about various aspects related to pouch function and quality of life. Some questions maybe repetitive and ask same thing in several ways. Some questions may have nothing to do with pouch function and will serve as “control” questions. Armed with your answers the PROPS team will then create a a standardized patient questionnaire which could help clinicians discuss ileoanal pouch outcomes with patients who are considering ileoanal pouch surgery. Furthermore, research could begin on improving negative symptoms that maybe associated with pouch surgery. Lastly, treatments could be studied by measuring some of these negative symptoms before and after an intervention.

Click here to learn more about the PROPS Study and how you can help.

This study has received ethical approval from the Central Health and Disability Ethics Committee (HDEC).

If you have ulcerative colitis (UC) which is controlled with Pentasa® or Asacol® (mesalazine/5-ASA) and live in Wellington/Kapiti/Hutt/Wairarapa, we invite you to take part in a new study aiming to establish if controlled hookworm infection is effective at controlling the inflammation caused by your ulcerative colitis. This study is being undertaken at the Malaghan Institute of Medical Research, Victoria University, Wellington, and Hutt Hospital, Lower Hutt.

People who come from developed, Westernised, countries experience less parasitic diseases (i.e. hookworm infection) but have high rates of ulcerative colitis. We know that hookworm infection can safely change your immune system to reduce inflammation and previous studies using hookworm to treat other diseases have shown promising results. This study would involve you either being given hookworm, which is applied by placing a gauze containing hookworm to the skin of the arm, or placebo (application of gauze without hookworm), and then monitoring your ulcerative colitis over the next year to see whether it becomes active. You would be seen regularly by the research team, and would provide blood and stool/poo samples to monitor your ulcerative colitis. Your participation is voluntary. 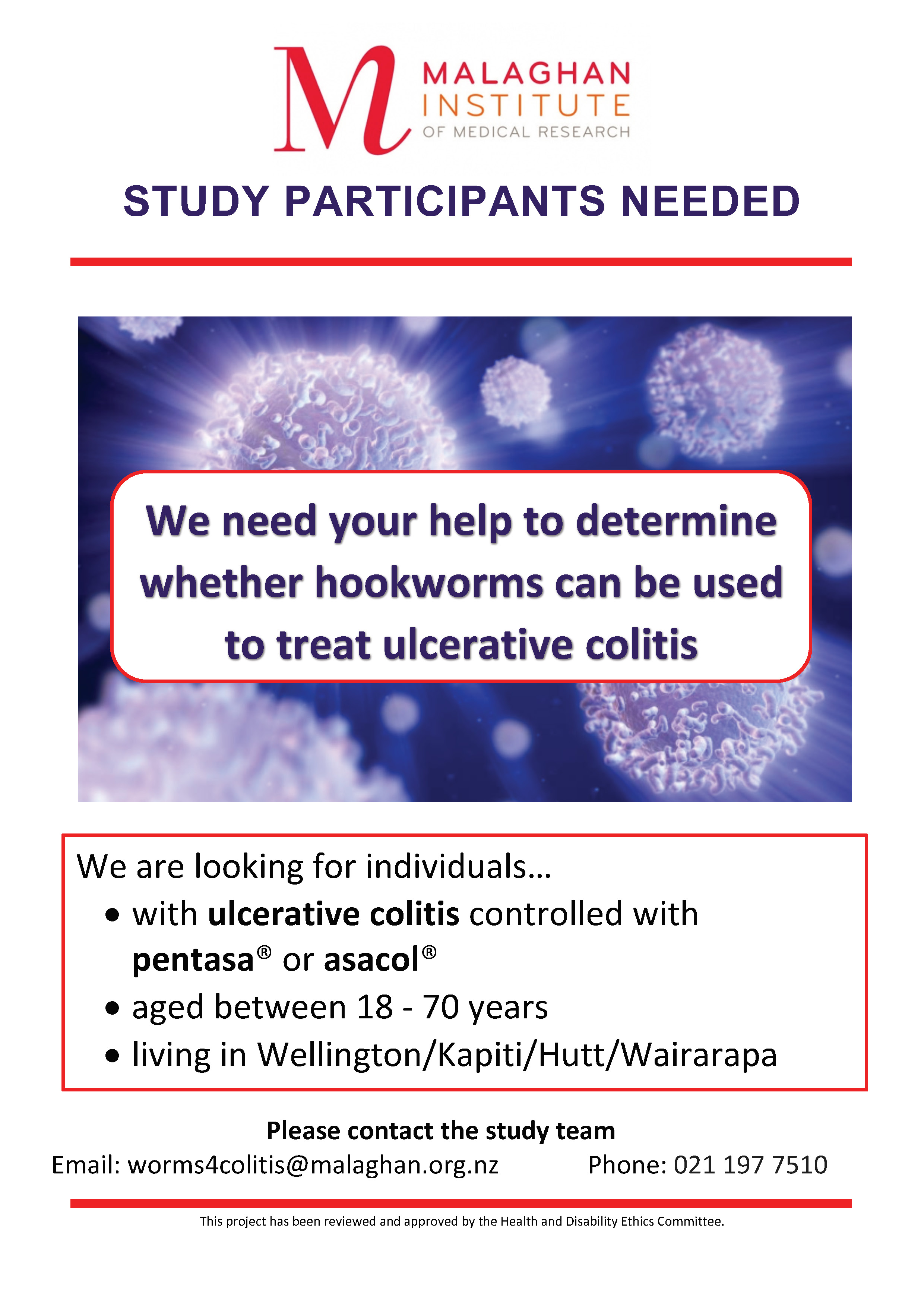 Do you suffer from Ulcerative Colitis?

P3 Research are looking for volunteers to take part in a study exploring a potential new treatment for Ulcerative Colitis.

To take part you must:

For more information phone 0800 737883 to speak with one of our team or apply online by visiting: www.p3research.co.nz and follow the links to the 'current studies' page. 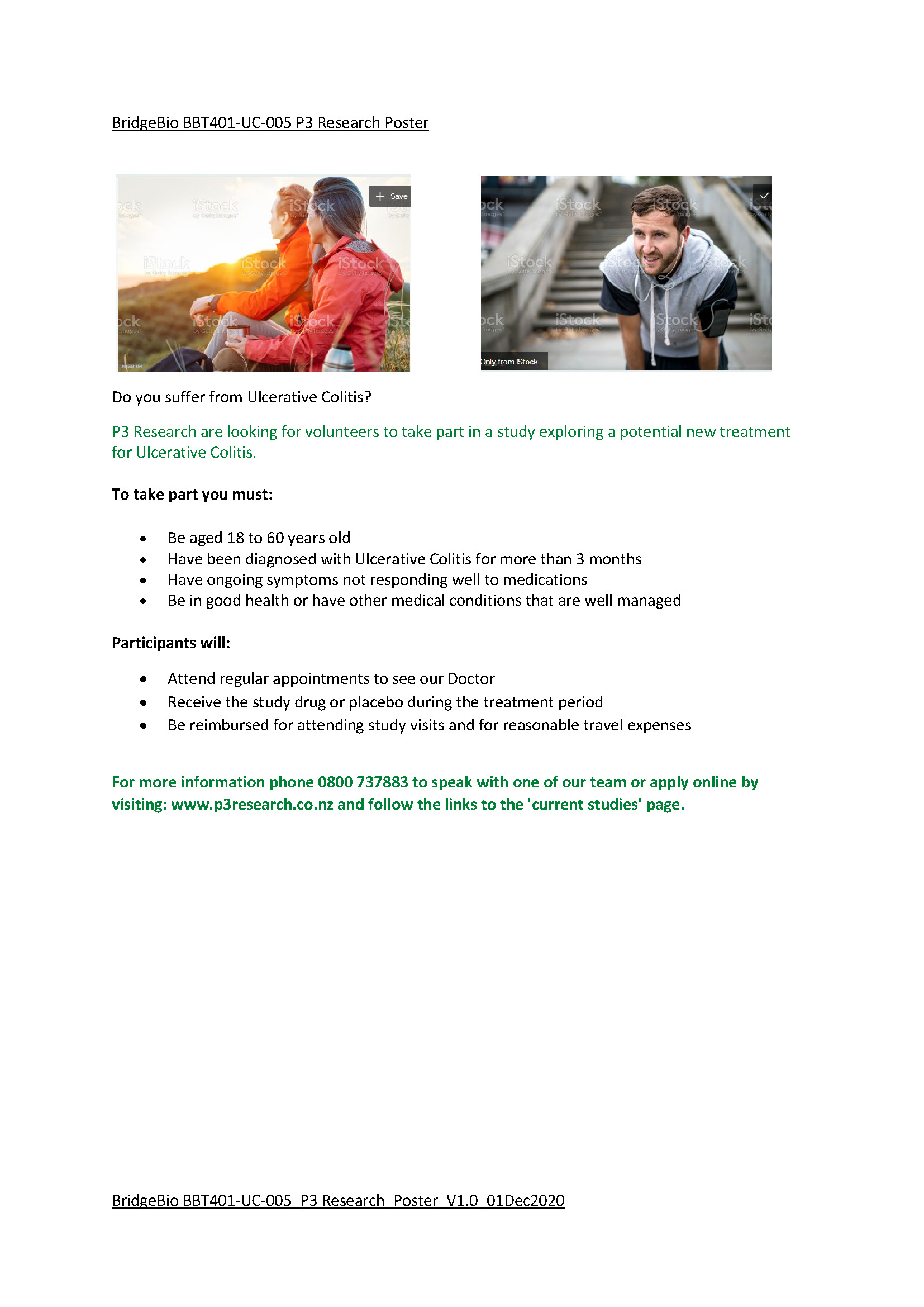